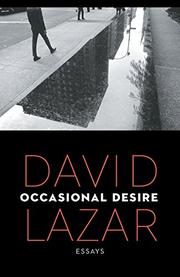 Essayist Lazar (Creative Writing and English/Columbia Coll., Chicago; The Body of Brooklyn, 2003, etc.) returns with a collection of ruminations ranging from the quotidian to the querulous, from the evanescent to the enduring.

The essays are full of odd information—e.g., James Agee and Robert Lowell died in taxis; M.F.K. Fisher had “immense eyes.” Lazar also leaps easily from popular to high culture. Yoda appears here, as do Elizabeth Taylor and Lou Costello, sometimes in the same essay with Philip Larkin, Flannery O’Connor or Francis Bacon. His diction varies widely, as well (often in the same piece). In one essay, Lazar starts a sentence with, “There is an Epictetian balance…”; he ends another—a moving and troubling piece about death—with this: “Death is a motherfucker.” Another characteristic of his style: quotations. One essay (on the self-portraits of Bacon) ends with about four pages of them, Bacon’s words at first alternating with those of Beckett, Pascal, Nietzsche, then taking over with five consecutive aphorisms. Lazar’s essays are traditional only in the sense that they use words and that they generally focus on a principal theme—though he is quick to digress when the mood strikes, which it often, and delightfully does so. He can be funny and self-deprecating (his essay about online dating), can craft wonderful sentences of about any length (there is a weirdly endless one in the dating essay), and can drop into his paragraphs epigrams worthy of Emerson. Oddly, when writing about the essay itself, he can be a bit dogmatic, insisting that his definition of the genre is the only worthy one.

Jagged pieces of a mirror that reveal a quirky, informed and immensely curious character.