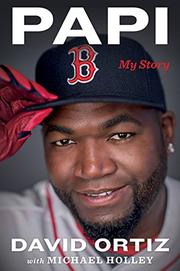 by David Ortiz with Michael Holley

The ups and downs of a legendary baseball career.

In an introduction that covers his early years in the Dominican Republic, Ortiz, who co-authored this book with sportswriter and radio host Holley, notes that he defied heavy odds just to survive, much less become a successful professional player. No one who follows baseball will deny that he was an imposing presence or that he was one of the finest clutch hitters of all time. He was a major contributor to the reversal of the historical misfortunes of the Boston Red Sox, beginning with their World Series victory in 2004 and continuing with another in 2007. After the 2013 Patriot’s Day Marathon bombing, Ortiz became one of the voices of “Boston Strong” and helped the team, and the city, to a therapeutic World Series victory. Along the way, there were, of course, bumps in the road. Ortiz feels he was underestimated by his first big league manager, Tom Kelly of the Minnesota Twins, and that his uneven start in the majors was primarily due to this. In 2009, Ortiz was accused of using performance-enhancing drugs and suffered a slump that had many observers suggesting he was finished. His marriage fractured, though he does not say exactly why, and he had more troubles with a manager, this time Bobby Valentine, in 2012, and recurring contract issues. Ortiz describes a few of his teammates, most notably Manny Ramirez, who was both “a hitting genius” and unpredictable and “rude,” and Jon Lester, a pitcher who recovered from cancer to return to the big leagues. Ortiz appears positive, constructive, and determined to succeed, and though he deploys a few vulgarities for effect, nothing upsets his cheerful optimism. There are a few intriguing behind-the-scenes anecdotes, but Ortiz offers little self-critical thought. Readers who have already canonized Big Papi will be reassured, but those who hoped to meet a more rounded, multidimensional human will struggle to find him here.

A one-of-a-kind slugger keeps his uniform clean in this chronicle of his days in baseball.