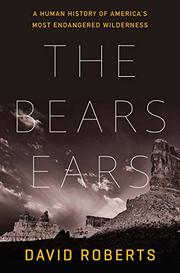 A Human History of America's Most Endangered Wilderness

The popular historian and explorer of the Southwest digs deep into the secrets of a remote slice of the American wilderness.

Roberts begins his narrative journey at a high place called Cedar Mesa, the epicenter of the geological and geographical complex of plateaus, canyons, and mountains gathered under the rubric of the Bears Ears National Monument. “All of these landscapes,” he writes, “are virtually uninhabited today but incredibly rich in antiquities.” They have also been the locale for busy generations of “pothunters,” whose illegal gathering of archaeological materials has removed those things from their context. The author, who for some reason continues to use the now-discredited term Anasazi for the ancient peoples of the region, delivers a fluent, anecdotal history that includes accounts of his own travels. The narrative encompasses the sometimes-intersecting lives of figures like Edward Abbey and Zane Grey on the literary front and the likes of Butch Cassidy and an anti-government activist son of Cliven Bundy’s on the criminal edge. Roberts’ own travels sometimes got him into trouble, as when, out in a remote corner of the monument, he encountered a Navajo man who threatened him with violence for trespassing on Native land even though another Navajo had given him permission to be there. The author is strong on both history and anthropology, aware of the most recent theories on such matters as Navajo origins. “Among southwestern Athapaskans, only the Navajo and the Western Apache have clans,” he notes, lending credence to the emerging thought that those migratory peoples might have absorbed some of the original inhabitants. Like Craig Childs’ kindred (though more poetic) book House of Rain (2007), Roberts’ latest combines research, journalism, and memoir in a satisfying whole that will please fans of his earlier books of both travel in wild places and key moments in Native American history.

At the top of the half-dozen books recently published on Bears Ears and a pleasure for travelers in the Southwest.