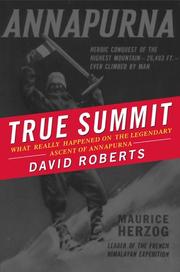 What Really Happened on the Legendary Ascent of Annapurna

A former true believer discovers that Maurice Herzog’s best-selling Annapurna (a stirring, romantic account of the first ascent of an 8,000-meter peak in the Himalayas) left out some of the adventure’s nastier details and some of the team’s more rancorous moments.

Roberts, a mountaineer and author of outdoor adventure books (Escape Routes, 1997, etc.), once ranked Annapurna as the best account ever written of a mountaineering expedition. Now he sees Herzog’s version as a “gilded myth” at odds with the facts. He examines the original account by Louis Lachenal, who accompanied Herzog to the summit in 1950 and whose posthumous 1956 memoirs had been carefully edited by Herzog and his brother. He also reviews a recently published biography of Gaston Rebuffat, another member of the expedition, whose letters home to his wife and whose marginal notes on Herzog’s account were especially revealing. Comparing Lachenal’s edited and unedited texts, Roberts quotes numerous changes to show how they had been shaped to make them jibe with Herzog’s version of events. In Herzog’s telling, the team was held together by a strong bond of loyalty to their leader (Herzog) and by the glory of their mission. From the outset, however, there was bitterness over the requirements that all swear an oath of obedience to Herzog and that no one but Herzog would be permitted to write or speak publicly about the expedition. In Lachenal’s text, references to all of the negative aspects of the expedition (quarrels, low morale, despair, and ugly details about diarrhea, nausea, and frostbite) were expunged. Roberts’s conclusion that Herzog’s version represents only a part of the truth seems indisputable, but not particularly surprising. More important are the rounded portraits of the individual team members that emerge from this investigation.

Not as gripping as Into Thin Air, but fans of daring outdoor exploits (especially those with long memories) will find this a satisfying armchair adventure.