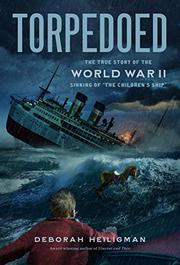 Heiligman recounts the little-known World War II maritime disaster of the sinking of the passenger ship City of Benares, which was evacuating children from England to Canada.

In 1940, with German air raids reducing many of England’s major cities to smoldering ruins and a threatened invasion looming, thousands of British parents chose to send their children to safety in Canada through a program called the Children’s Overseas Reception Board. On Sept. 13, 1940, the passenger liner departed Liverpool in a convoy bound for Canadian ports. Onboard were 90 CORB children, their chaperones, crew, and paying passengers. Their Royal Navy escort left it on Sept. 17, and that night, unaware of the refugee children aboard, the commander of German submarine U-48 ordered three torpedoes launched at the Benares, the third hitting its target with devastating effect. Heiligman makes the story especially compelling by recounting the backstories and experiences of several of the children and their chaperones. These characters are presumably white; Heiligman takes care to note that the overwhelming majority of the crew were South Asian Muslims whose stories were not collected after the disaster. It’s a customarily masterfully paced and beautifully designed book, with reproductions of archival photographs and documents complemented by original pencil art by Lee that captures the action aboard the Benares and afterward. Expansive backmatter includes interviews conducted with Heiligman’s sources, several by her.

An exceptionally well-researched and impressively crafted tale of desperation, tragedy, and survival.