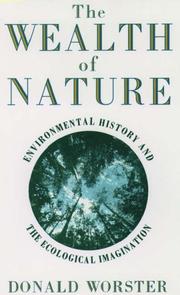 Environmental History and the Ecologial Imagination

Sixteen thoughtful essays that examine the present and future implications of America's past relationship to the land—and that draw, as Worster (American History/University of Kansas; Rivers of Empire, 1986, etc.) puts it, a ``picture of the human past that is radically unlike anything you will find in the standard undergraduate history textbooks.'' In these pieces (some of which appeared originally in academic journals and books), Worster speaks with awe of the ``search to discover a less reductive, less ecologically and spiritually nihilistic, less grasping kind of materialism.'' In this spirit, reminiscent of Thoreau and Joseph Wood Krutch (one of the author's early inspirations), Worster sounds deeply skeptical over the prospect that a market economy can ever be compatible with responsible stewardship of this country's natural resources: His own preference is for an environmentalism ``that talks about ethics and aesthetics rather than about resources and economics.'' Not surprisingly, given these views, Worster throws a wet rag over the concept of ``sustained development''; hails an American conservation revolution that views the land as an interdependent ecosystem; and calls for an end to all federal subsidies of western irrigation projects. As an alternative to federal and state management of resources, he speaks eloquently about individual responsibility for the environment. And when he's not warning about our current encroachments on nature, Worster can be especially illuminating about how the environment has affected our past- -pointing, for example, to the Midwest's overemphasis on wheat- growing as a cause of the Dust Bowl crisis of the 1930's; discussing the 1935 Soil Erosion Act, the first comprehensive legislation to preserve the lifeblood of American agriculture; and carefully tracing the evangelical fervor of America's greatest environmentalists to the dissident and missionary spirit of Protestantism. Probably too pessimistic on reconciling conservation with a market economy, but informed and lucid about how we've lost ground in the fight to save our natural resources.