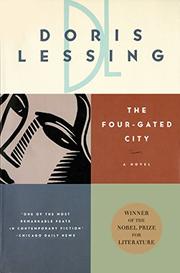 This is the fifth and last installment of Doris Lessing's Bildungsroman—Children of Violence—which began with Martha Quest, published in England in 1952. Twice as voluminous (more than 600 pages) and much more overwhelming than any novel in the series, it will reveal changes in Miss Lessing, Martha, and the world which now outdistances our time and crosses into the next century after The Catastrophe. When last seen before leaving Africa, Martha was a combative young woman with a strong masculine mind and female instinct—the latter only apparent here at the very outset since sexuality becomes a very ancillary concern. So too for the most part do the political events and ideas and stances (Communism) with which Martha was involved. Now as the book opens in London, she is totally unaffiliated, wanting no liens and having no belongings beyond a suitcase. Temporarily she goes to live with Mark Coldridge, whose wife is in a mental hospital, and help him with his writing and his messy, muddled household which expands continuously (relatives, children of relatives, mental patients, etc.) Lynda, Mark's wife, comes back from the hospital to live in the converted basement with another disturbed woman and hold seances. Martha herself has one period of dangerous instability when threatened with the visit-visitation of her own mother. As time goes on, she identifies more and more with Lynda and the failure of drugs, psychiatrists, shock treatment—a failure which is a lack of awareness of some sort of inner life unknown to science. Miss Lessing, always a protester, seems to be inveighing once again against entrapment—whether political or social or psychiatric, opting for freedom which ultimately she and Lynda (with their special extrasensory powers) find at the close on a nameless island. Certainly much less of a direct documentary than the earlier books, at times ambiguous and confusing. But it does have the self-propelled continuity of The Golden Notebook, a kind of flaying, furious, obsessive momentum which should assure much of the same audience.