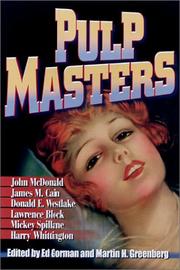 The biggest revelation of these five pulp novelettes, 1938–77, and Harry Whittington’s 1953 short novel So Dead My Love is how much more their common voices and formulas, often displayed in apprentice work, make then sound like each other than like the eventually famous authors—John D. MacDonald (a fraternity killer), Lawrence Block (a stag-party killer), Donald E. Westlake (a sad, crimeless anti-romance)—you thought you knew. The two exceptions are James M. Cain, whose tricky valentine “The Embezzler” is vintage Cain, and Mickey Spillane, who, despite the absence of Mike Hammer from “Everybody’s Watching Me,” sounds, for better or worse, exactly like Spillane.