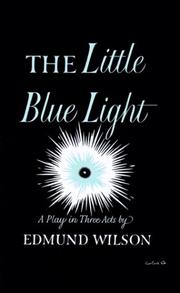 A Play In Three Acts

An equivocal play- both as to form and content- whose admixture of so many disparate elements fails to jell. Socio-political in intent, it is peopled by a cast of characters whose place in a future America of about 1975 does not obscure their blood relationship to the neurotic inhabitants of Mr. Wilson's previous Hecate County. Horror story author, Julius Gandersheim, returns to his ancestral home in search of his imaginary monster, Shidnate Slyme, and stays on to help his tenant publisher, Frank Brock, fight a journalistic battle for American freedom against political power factions and other menaces such as Frank's nymphomaniac wife, her decadent boy friend and a polymorphic gardner who speaks first with an Italian accent then Irish, Scottish and Russian, finally turning out to be the Wandering Jew. Although Gandersheim and the gardener try to help honest Frank, they are all exterminated by a souped up ray gun in the shape of a flashlight which blows everyone up — Thank God — all except the gardener, that is, who delivers a philosophical epilogue on "he prayeth best, who loveth best, etc." or words to that effect. Make mine Coleridge, upon consideration he is really less old hat than this is.