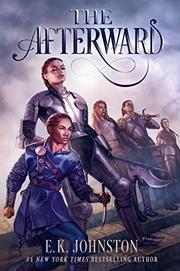 Lady knights return to town as heroes—and struggle with life after fame.

Sir Erris Quicksword returns victorious to the city of Cadria with her six faithful companions, having managed to find the magical godsgem and destroy the evil Old God. Welcomed home with great rewards and acclaim, Sir Erris marries the king, and peace returns to the kingdom. Bisexual Olsa Rhetsdaughter, the one lowborn member, feels utterly abandoned and falls back into a life of struggle and thievery. Meanwhile, apprentice knight Kalanthe Ironheart, who is lesbian, returns from her first mission only to prepare apprehensively for marriage—likely to a wealthy man hoping for heirs and willing to pay off her family’s debt. Johnston (That Inevitable Victorian Thing, 2017, etc.) weaves a compelling fantasy world in which meticulously crafted female characters slip easily between chain mail and dresses, enjoying many freedoms and yet facing economic and biological pressures to marry men. The narrative flits between the great quest and “the afterward,” revealing the romantic love between dutiful Kalanthe and defiant Olsa. The characters are diverse—including trans and asexual representation—and many are portrayed as beautifully dark-skinned with natural hair. Impatient readers will note that there’s an awful lot of armor and weaponry with very little questing. It’s with some relief that there’s trouble in the realm once again.