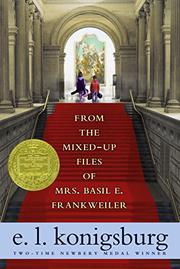 FROM THE MIXED-UP FILES OF MRS. BASIL E. FRANKWEILER

Elaine Konigsburg's first sharp bite of suburban life, Jennifer, Hecate, Macbeth, William McKinley, and Me, Elizabeth, was a dilly; this one's a dandy—just as fast and fresh and funny, but less spoofing, more penetrating. From the files of Mrs. Frankweiler comes the chronicle of Claudia Kincaid, almost twelve, and her brother Jamie, who is nine. Tired of being her same old taken-for-granted self, Claudia decides to run away, and Jamie goes along because he is flattered at being asked. Claudia has planned every detail: escape on the empty school bus, change of clothing in a violin case, sanctuary in the Metropolitan Museum. For a week the children elude the guards and exploit the opportunities of the museum: they sleep in a royal bed, bathe in the cafeteria pool, and pass part of each day in study on the fringe of lecture tours. Midweek, a marble angel of dubious origin arrives; Claudia is convinced that it is a Michelangelo and determines to prove it: she will authenticate Angel and become a heroine before going home. But no—by arrangement of Mrs. Frankweiler, she goes home a heroine only to herself (and happy); and she knows something about secrets she hadn't known before—they have to come to an end... Like the title, Mrs. Frankweiler is a bit of a nuisance; and an offhand, rather bemused reference to dope addiction is unnecessary but not inappropriate. What matters is that beyond the intriguing central situation and its ingenious, very natural development, there's a deepening rapport between their parents; "we're well trained (and sure of ourselves)...just look how nicely we've managed. It's really they're fault if we're not homesick." There may be a run on the Metropolitan (a map is provided); there will surely be a run on the book.