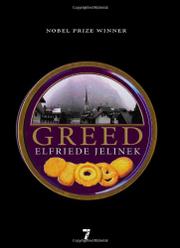 The male drive for property acquisition and sexual conquest is the theme of this murky postmodernist novel from the Austrian writer, winner of the 2004 Nobel Prize in Literature.

Though narrative and character are secondary here, it does have a storyline of sorts, plus a protagonist: Kurt Janisch, a rogue cop in the Alpine foothills of southern Austria. The ladies swoon over Kurt, a youthful-looking grandfather. He has a wife, a son who’s a telephone repairman, a devoutly religious daughter-in-law and a grandson. The opening suggests we will get to know this family, but they soon disappear from view, along with the anti-clerical gibes. We’re left with Kurt and his customary targets: single women or widows who own houses. “Property is the only thing that counts . . . a house keeps its value. A body decays.” Yet ironically, Kurt is up to his ears in debt, unable to get the houses he craves. Perhaps he is stymied by his “persistent angry darkness.” Not surprisingly, he likes rough sex, which leads him to strangle Gabi, who’s not quite 16, and dump her body in the lake. The storyline, which comes and goes, shows the discovery of the body and the subsequent fruitless investigation (20 detectives, 2,000 people questioned, bureaucracy at work); there will be no resolution, no dénouement, just a suicide by another of Kurt’s targets. Nor will Kurt’s darkness be examined; he is little more than an erect penis seeking a true climax. (Like Jelinek’s 1989 novel Lust, this associates sexual hunger with capitalistic greed.) What’s left is an authorial voice that manages to be both whimsical and labored; this weakens the satirical barbs against societal forces that have made nature itself suspect, whether the man-made lake or the mountain hollowed out by a mine.

Much less accessible than Jelinek’s best-known work, The Piano Teacher (1983), this is an unrewarding trek across a depressing landscape.