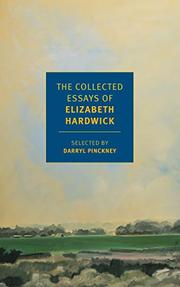 THE COLLECTED ESSAYS OF ELIZABETH HARDWICK

A career-spanning collection of essays, reviews, criticism, and more from a co-founder of the New York Review of Books.

As a novelist and co-founder of the immensely influential (and still-running) NYRB, Elizabeth Hardwick (1916-2007) lived at the center of midcentury public intellectual life in America. (She was even married to poet Robert Lowell.) Throughout her six-decade career, Hardwick was devoted to pursuing literature as a way of life and finding life in literature. A quintessential “writer’s writer,” her essays are not academic in style, but neither do they pander to broad public interest or themes. Instead, she writes with a clear, concise voice that is simultaneously accessible and erudite. At the heart of Hardwick’s oeuvre is a study of literature and writers that includes essays on her contemporaries Norman Mailer, Joan Didion, and Philip Roth, among others, as well as historical studies of American luminaries Herman Melville, Henry James, and Edith Wharton. Perhaps the most relevant essay among the collection is the opening lamentation “The Decline of Book Reviewing.” Written in 1959 for Harper’s, the essay criticizes popular book critics and reviews their soft and moderate tone: “Sweet, bland commendations fall everywhere upon the scene; a universal, if somewhat lobotomized, accommodation reigns. A book is born into a puddle of treacle; the brine of hostile criticism is only a memory.” The sentiment captured by the essay could easily be used as a stand-in for the current climate of book culture, which prizes the market and pleasure of reading to such an infantilizing extent that criticism is nearly obsolete. Contextualized with an introduction by longtime NYRB contributor and author Darryl Pinckney (Black Deutschland, 2016, etc.), who was a creative writing student of Hardwick’s, the essays collected in this volume represent a vital entry point to American literature and culture.

An essential compendium of midcentury American intellectual life, one that reaffirms the personal and cultural importance of literature.