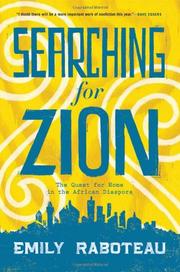 The Quest for Home in the African Diaspora

Rather than a simple analysis of where scattered Africans ended up geographically, Raboteau (The Professor’s Daughter, 2006) dissects the search for home as a search for belonging.

No quest for home is ever limited to a simple place, and the author evokes that reality beautifully by focusing on the spiritual aspect of the search for many of African descent. In this way, she gives the diaspora both historical and contemporary context. As a mixed-race woman, Raboteau embodies the quest for a sense of self, and she explains her personal dilemma early on. “I didn’t think of myself as the ‘tragic mulatto,’ straight out of central casting,” she writes. “The role was an embarrassing cliché from a dusty, bygone era, but I struggled against it all the same. If Barack Obama could transcend it, why couldn’t I? I belonged nowhere. I wasn’t well. Was the sickness my own, my country’s, or a combination of the two?” Stories of her disaffected youth spent with a Jewish friend lead easily into the beginning of the author’s global search party. Her first travels took her to Israel, where she learned of a large community of black Jews from Ethiopia. From Israel and the Jewish faith, she moved to explore the Rasta faith in Jamaica and then in Africa. Raboteau explored other issues of identity in Africa, as well, including African-Americans who settled in African cities and the genesis of trans-Atlantic slavery. The author never shies away from the difficult questions surrounding her—e.g., the Rasta worship of a dictator or the inherent double standards of the Israeli-Palestinian conflict. Her head-on confrontation of these subjects makes the book easier to digest, and her treatment of the issues results in the unwritten conclusion that none of the communities she visited truly accomplished what they set out to do. In the end, the author found her answers in a way that many will see coming, but Raboteau approaches the conclusion from a fresh perspective that keeps it from feeling stale.

An excellent choice for readers interested in religion, philosophy and the elusive concept of home.