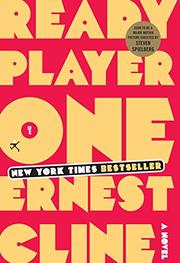 Video-game players embrace the quest of a lifetime in a virtual world; screenwriter Cline’s first novel is old wine in new bottles.

The real world, in 2045, is the usual dystopian horror story. So who can blame Wade, our narrator, if he spends most of his time in a virtual world? The 18-year-old, orphaned at 11, has no friends in his vertical trailer park in Oklahoma City, while the OASIS has captivating bells and whistles, and it’s free. Its creator, the legendary billionaire James Halliday, left a curious will. He had devised an elaborate online game, a hunt for a hidden Easter egg. The finder would inherit his estate. Old-fashioned riddles lead to three keys and three gates. Wade, or rather his avatar Parzival, is the first gunter (egg-hunter) to win the Copper Key, first of three. Halliday was obsessed with the pop culture of the 1980s, primarily the arcade games, so the novel is as much retro as futurist. Parzival’s great strength is that he has absorbed all Halliday’s obsessions; he knows by heart three essential movies, crossing the line from geek to freak. His most formidable competitors are the Sixers, contract gunters working for the evil conglomerate IOI, whose goal is to acquire the OASIS. Cline’s narrative is straightforward but loaded with exposition. It takes a while to reach a scene that crackles with excitement: the meeting between Parzival (now world famous as the lead contender) and Sorrento, the head of IOI. The latter tries to recruit Parzival; when he fails, he issues and executes a death threat. Wade’s trailer is demolished, his relatives killed; luckily Wade was not at home. Too bad this is the dramatic high point. Parzival threads his way between more ’80s games and movies to gain the other keys; it’s clever but not exciting. Even a romance with another avatar and the ultimate “epic throwdown” fail to stir the blood.

Too much puzzle-solving, not enough suspense.