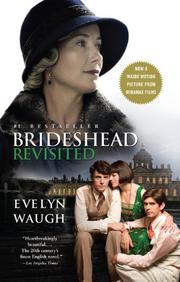 Here's perhaps the first chance we have had to make Waugh an item for big sales. Contradictory as it may sound, this may well be the most popular book Waugh has written and at the same time the most serious. There is none of the intense if sterile brilliance of his earlier books — their world of sybaritic pleasures and empty lives. Here, if unobtrusively, is the corrective of faith — Waugh, as did Huxley, has turned from nihilism to belief — in this case that of the Catholic Church. This is the story of the rich, the beautiful and the damned Marchmains, as told by Charles Ryder who revisited their home, Brides-head, in the war years. Here was his first introduction to the Marchmains, when at Oxford with Sebastian, the second son, Sebastian who was eccentric, exquisite, appealing, who drank to escape bondage to his mother, the pious, ascetic Lady Marchmain, who drove her husband from her in much the same way. Sebastian was never to lose the need for alcoholic excess, but his Catholic conscience, implanted in the nursery, reappeared at intervals during his last, lost years in Morocco. This is also the story of Julia, his sister, Julia who defied the Church and married vulgar, bombastic, monted, divorced Rex Mottram, and then ten years later met Ryder again and fell in love with him. When each secured divorce, she refused to marry him because of the shadow of papal disapproval. Such is the outline of the story. The details, particularly in the Oxford years of Sebastian and Ryder, have much of the graceful, astringent satire one associates with Waugh; the latter half, with the disintegration of Sebastian, the abnegation of Julia, is saddening even though Waugh does not wholly convince one with the validity of the Catholic viewpoint. And not to be forgotten, there is the fascination of the fluent facility of Waugh's prose, shaped by a practised observation and a civilised intellect.... This for your sophisticated readers. — B.O.M. for January.