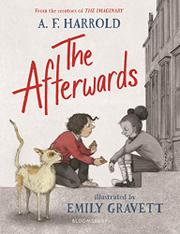 When Ember’s best friend, Ness, dies, Ember tries to bring her back to the world of the living.

December, or Ember, as she is known to her family, and her next-door neighbor Happiness, or Ness, have been best friends for three years. Ember is shocked and bewildered when it is announced at school one morning that Ness has died after a fall from a swing at the park. She is distracted enough to accompany her layabout uncle to his house after school, but his intentions are not good. In a strange, black-and-white place, he exchanges Ember’s life for that of his beloved dog, who has just died. Ember discovers Ness here, sadly subdued and lacking interest—but Ember wants her back. Gravett’s full-color illustrations perfectly channel Harrold’s narrative, Ember’s feisty character, and the sense of slightly spooky, sad otherness in this place after life. Here are shadows of creatures that were alive but that seem to fade away like smoke. “It’s where forgetting happens,” a cat tells Ember. “Echoes….Your people echo longest, that’s all. Nothing more.” In addition to Gravett’s pictures, the striking design disorients readers with words that spiral and slide and a white-on-black nighttime interlude. Ember and her widowed dad have light-brown skin and dark hair; Ness is black.

Gripping and poignant, a look at what it means to be brave and alive in the face of loss.