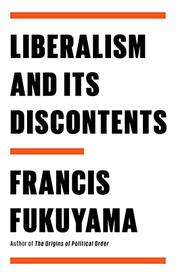 LIBERALISM AND ITS DISCONTENTS

The renowned political scientist and philosopher considers classical liberalism and the broad range of enemies arrayed against it.

“By ‘liberalism,’ ” writes Fukuyama, “I refer to the doctrine…that argued for the limitation of the powers of governments through law and ultimately constitutions, creating institutions protecting the rights of individuals living under their jurisdiction.” Born of events such as the English civil war and the Enlightenment, this liberalism also encouraged diversity of thought, religion, and ethnicity, placing it squarely in the crosshairs of today’s authoritarian nationalists, not least Donald Trump. Fukuyama has often been identified with conservative causes, but his thinking here is democratic to the core, and he has no use for such pathetic lies as Trump’s insistence that the 2020 election was stolen. That said, the author notes that liberalism has many enemies on both the left and the right for numerous real yet correctable failings. The neoliberalism that has emerged over the past couple of generations has accelerated inequality, and numerous institutions have been eroded while others, such as the Electoral College, have been revealed to be anti-democratic. Both left and right, the author argues, have trouble accepting that governing over diversity, the hallmark of liberalism, means governing over many ethnic and national groups, strata of income, and competing interests. He adds, however, “Left-of-center voters…remain much more diverse” in political outlook. Essential to a liberal society, Fukuyama insists, is the right to vote: “Voting rights are fundamental rights that need to be defended by the power of the national government.” While he insists that individual rights take precedence over group rights, he also observes that the social contract demands citizen participation. To the conservative charge that the social contract is one thing but the “common moral horizon” another, he answers that yes, liberalism does not insist on a single morality—which “is indeed a feature and not a bug.”