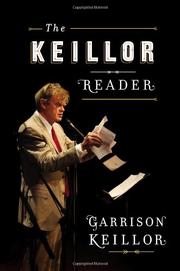 Heir to Mark Twain, James Thurber and E. B. White, Keillor offers more than laconic, sometimes-rueful, reports from the fictional Midwestern town of Lake Wobegon. Besides selected Prairie Home Companion monologues—written in an adrenaline rush on the morning of each show—this collection contains poetry, fiction and assorted essays, each introduced by autobiographical musings. A frequent subject is Keillor’s childhood among the Sanctified Brethren, fundamentalists in Anoka, Minn., who “did not read novels or poetry and were wary of history, except what was in Scripture.” Writing, they believed, was sinful; nevertheless, becoming a writer was Keillor’s dream. In junior high school, he reported on sports for a local weekly; he worked his way through the University of Minnesota as an English major; and in 1969, he sold his first story to the New Yorker. A Prairie Home Companion began on the radio in 1974. “My bread and butter,” he writes, “was the good people of Lake Wobegon, but writing about good people is an uphill climb. Their industriousness, their infernal humility, their schoolmarmish sincerity…their clichés falling like clockwork—they can be awfully tiring to be around.” Those good people, however, have not been Keillor’s only subjects. Here, he gives us an acerbic newspaper column about Americans who “shell out upward of $10 billion a year for health care for pets” but can’t abide the thought “that everybody in America should receive the same level of care enjoyed by an elderly golden retriever.” He lovingly recalls the urbane Paris Review editor George Plimpton. In “Home,” “Cheerfulness” and “My Stroke (I’m Okay),” he celebrates the gifts of sharing your world with people you’ve known “almost forever” and working at what you love. “The key to cheerfulness, I discovered…was forward motion,” he writes. “The calm contemplative life equals melancholy.”

Keillor’s moments of contemplation have produced some of the finest essays in this lovely collection.