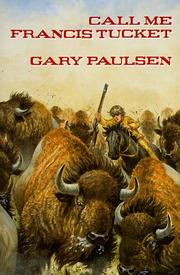 Francis, 14, is alone on the frontier. In Mr. Tucket (1969) he was captured by Indians, rescued by the mountain man Mr. Grimes, and learned to survive. He continues his journey westward across the endless prairie, hoping to find his parents in a wagon train headed for Oregon. Along the way he is beset by thieves, caught in a buffalo stampede, and adopted by two young children whose father has died of cholera and who have been abandoned by the fearful adults in their wagon train. Characteristic of all Paulsen's works, the narrative flow is smooth and uncluttered, the action gritty and realistic, the story thrilling. This one reads like the second book of a trilogy; it starts in the middle and doesn't go anywhere, and familiarity with the first book is mandatory. But if Call Me Francis Tucket is unsatisfying on its own, like good serial fiction, it will make readers eager to find out what happens next, and hope a third book is in the offing. (Fiction. 10+)