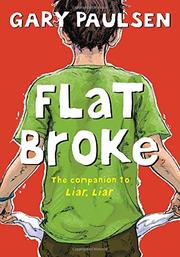 A 14-year-old greedily launches himself headlong into the entrepreneurial world, with amusing consequences.

In the sequel to Liar, Liar (2011), Kevin’s parents have taken away his allowance to punish him for his creative lying. Never impeded by misfortune (or a guilty conscience or the advice of everyone wiser than he), he decides it’s a great time to make money. First he provides the perfect venue for poker games, even though some of his hapless player-victims begin to lose more money than they have. With the gambling business running admirably, he starts cleaning neighbors’ garages, not worrying that depositing the trash in store Dumpsters is illegal. Then he begins “borrowing” a golf cart to sell cookies and coffee to college students. But he steps on too many people on the way up, inevitably leading to his downfall. Kevin’s good-natured—if oversimplified—view of the world is pretty funny, and while readers will anticipate problems long before he does, it just adds to the fun. Chapter titles taken from a fictitious book on making money—“The Successful Person Has Vision That Others Lack,” for example—contrast nicely with the disastrous outcome of Kevin’s grandiose plans. That his droll first-person account only lightly sketches other characters hardly matters.

A jocular, fast-paced voyage into the sometimes simple but never quiet mind of an ambitious eighth grader.