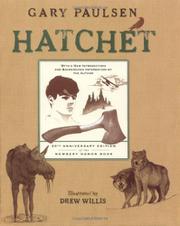 A prototypical survival story: after an airplane crash, a 13-year-old city boy spends two months alone in the Canadian wilderness. In transit between his divorcing parents, Brian is the plane's only passenger. After casually showing him how to steer, the pilot has a heart attack and dies. In a breathtaking sequence, Brian maneuvers the plane for hours while he tries to think what to do, at last crashing as gently and levelly as he can manage into a lake. The plane sinks; all he has left is a hatchet, attached to his belt. His injuries prove painful but not fundamental. In time, he builds a shelter, experiments with berries, finds turtle eggs, starts a fire, makes a bow and arrow to catch fish and birds, and makes peace with the larger wildlife. He also battles despair and emerges more patient, prepared to learn from his mistakes—when a rogue moose attacks him and a fierce storm reminds him of his mortality, he's prepared to make repairs with philosophical persistence. His mixed feelings surprise him when the plane finally surfaces so that he can retrieve the survival pack; and then he's rescued. Plausible, taut, this is a spellbinding account. Paulsen's staccato, repetitive style conveys Brian's stress; his combination of third-person narrative with Brian's interior monologue pulls the reader into the story. Brian's angst over a terrible secret—he's seen his mother with another man—is undeveloped and doesn't contribute much, except as one item from his previous life that he sees in better perspective, as a result of his experience. High interest, not hard to read. A winner.