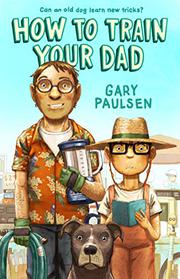 HOW TO TRAIN YOUR DAD

Carl tries to change his father’s frugal behavior over the course of a summer.

Narrator Carl, 12, believes that his problem is his relentlessly optimistic, handy dad, who sees their life in a small trailer with pigs (fed partly from dumpster forays), chickens, and a garden as rich and full. But Carl’s heart has been captured from afar, and he believes that being noticed will take an improved kind of being “lookatable.” Carl’s father regards money as stored human energy (and therefore sees energy as a kind of currency)—he “leans well into the concept of being practical and has never been one to honor the cosmetic side of things” and is an accomplished barterer who can’t pass up a garage sale. Carl’s pink, feminine overalls come from a garage sale, and his too-small underwear hails from another bargain source. Carl’s garrulous, singularly imaginative sidekick Pooder (he “has made tangents an art form”) offers color commentary, advice, comic relief, and perspective by turns. Carl takes inspiration from a pamphlet on puppy training in his plan to reward good behavior and ignore less desirable (as in dumpster diving for shoes) in his dad. The tall-tale, anecdotal quality of Carl’s story is entertaining with its recitation of disastrous, smelly, embarrassing, dangerous, and misguided moments. Both father and son turn out to be likable heroes. Characters are assumed White.