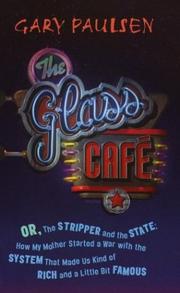 or The Stripper and the State; How My Mother Started a War with the System That Made Us Kind of Rich and a Little Bit Famous

Long, breathless sentences like this one create a distinct voice for the 12-year-old narrator of this light comedy that features a supermom who’s raising a child and working her way toward graduate school as an exotic dancer at the Kitty Kat Club. It all hits the fan when Tony’s sketches of some of the girls in the club’s dressing room end up on exhibit at the local museum. Down swoops a panicky child-welfare worker, police officer in tow—both of whom meet their match in Tony’s intelligent, forthright, fiercely protective mother, Al. The confrontation quickly degenerates into a wild ruckus, followed by a media circus, a courtroom scene, and a telescoped resolution involving both a large cash settlement and a possible hookup between Al and Tony’s over-the-top drama teacher. Not too likely, but all good fun, and Paulsen claims that Al is based on an actual acquaintance. Introduce reluctant readers, Paulsen fans, or anyone who enjoys an occasional belly laugh to this prototypical preteen and his most memorable mom. (Fiction. 9-11)