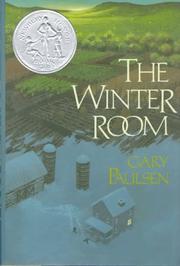 More a prose poem than a novel, this beautifully written evocation of a Minnesota farm perhaps 40 years ago consists of portraits of each of the four seasons, along with four brief stories told by old Uncle David in the room the family calls "The Winter Room." And, in its way most revealing, there is also an introduction ("Tuning") so skillfully written that it ironically belies its own message: that books cannot have smells, or sound, or light, since these must be supplied by the reader in response to the author's words. With his authentic descriptions, Paulsen makes it easy for the reader to comply. It's not clear to whom Eldon, the 11-year-old narrator, speaks—mostly he describes, rather than explains, though the explanatory creeps in: "Each cow has to have a calf or it won't. . .give milk." Unlike the novels of Laura Ingalls Wilder and Jean George, which also conjure life in a particular setting through the accumulation of detail, this presentation of the marvelous minutiae of farm life supports only a gossamer plot hinging on the relationship between story and reality. As carefully structured as cobweb, the idea is there, almost invisible, from early on, when emulating a feat in a Zane Grey novel results in a dangerous prank; it resurfaces in the character of Father, who doesn't answer questions but enjoys speaking in simile; and climaxes when Eldon's brother challenges the fragile illusion of Uncle David's stories by calling them lies, causing a moving philosophical crisis in this taciturn family. Readers will be rare, but this is too fine to be ignored as a shelf-sitter.