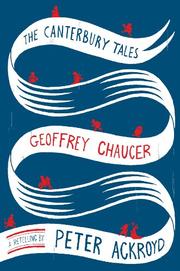 by Geoffrey Chaucer and Peter Ackroyd and illustrated by Nick Bantock

Continuing his apparent mission to refract the whole of English culture and history through his personal lens, Ackroyd (Thames: The Biography, 2008, etc.) offers an all-prose rendering of Chaucer’s mixed-media masterpiece.

While Burton Raffel’s modern English version of The Canterbury Tales (2008) was unabridged, Ackroyd omits both “The Tale of Melibee” and “The Parson’s Tale” on the undoubtedly correct assumption that these “standard narratives of pious exposition” hold little interest for contemporary readers. Dialing down the piety, the author dials up the raunch, freely tossing about the F-bomb and Anglo-Saxon words for various body parts that Chaucer prudently described in Latin. Since “The Wife of Bath’s Tale” and “The Miller’s Tale,” for example, are both decidedly earthy in Middle English, the interpolated obscenities seem unnecessary as well as jarringly anachronistic. And it’s anyone’s guess why Ackroyd feels obliged redundantly to include the original titles (“Here bigynneth the Squieres Tales,” etc.) directly underneath the new ones (“The Squires Tale,” etc.); these one-line blasts of antique spelling and diction remind us what we’re missing without adding anything in the way of comprehension. The author’s other peculiar choice is to occasionally interject first-person comments by the narrator where none exist in the original, such as, “He asked me about myself then—where I had come from, where I had been—but I quickly turned the conversation to another course.” There seems to be no reason for these arbitrary elaborations, which muffle the impact of those rare times in the original when Chaucer directly addresses the reader. Such quibbles would perhaps be unfair if Ackroyd were retelling some obscure gem of Old English, but they loom larger with Chaucer because there are many modern versions of The Canterbury Tales. Raffel’s rendering captured a lot more of the poetry, while doing as good a job as Ackroyd with the vigorous prose.

A not-very-illuminating updating of Chaucer’s Tales.