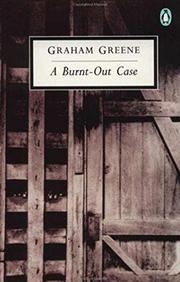 Almost all of Greene's serious works have been framed within the context of Catholicism, and while intimations of grace and disgrace hover over his new book here, there is no sterner conflict-no deadlock between the flesh and the faith. For Querry, the central character, has come "to the end of everything"- and the symptomatic attitudes of his predecessors (failing priests, disappointed idealists, hollow men) the pessimism- the doubt- the denial, here reach an impossible indifference. In his escape from the world, (an easy success with women, real fame as an architect) Querry comes to a leproserie in the Congo attached to a Catholic mission and run by a Doctor Colin whose only belief is a practical humanity. There he is assigned a servant- Deo Gratias- a "burnt-out case"- a leper who loses everything that can be eaten away before he is cured. And there Querry, who is obviously just as mutilated, attempts to remain uninvolved. Deo Gratias' disappearance however impels him to go out and search for him in the bush- and save his life. As the weeks pass, he works a little- designs a new hospital. But the world does not respect his privacy; a journalist exploits the legend which is growing- the second coming of Schweitzer?- "The Recluse of the Great River". And a young wife, Marie, unhappily married to an aging planter, uses him to escape, and while he is completely innocent of any interest in her, exposes him to the injuries of an aggrieved husband in a finale which is regrettably closer to farce than to tragedy..... To much of this Greene brings his expert touch: the steamy, fetid country; the contrasts of character which range from Doctor Colin's dedication to Querry's repudiation, from Deo Gratias' touching gratitude to Marie's childlike guile. If there is a certain sense of failure it is perhaps Querry's- the commitment he avoids may also be the reader's. Strong publisher backing and the author's name assure initial attention.