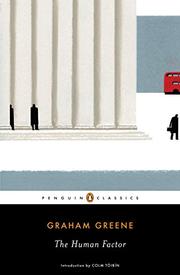 A man in love walks through the world like an anarchist, carrying a time bomb." "As long as we are alive we'll come together again. Somehow. Somewhere." Only Graham Greene could get. away with lines like that—by creating the gentlest, most civilly persecuted of all his men-on-the-run, a bicycle-riding, dog-walking commuter whose heroics are so understated that images of passion and violence take on fresh, half-ironic validity. This "man in love" is Castle, a veteran agent-turned-deskman (African division) for British Intelligence. A quietly ardent husband to black wife Sarah. A quietly doting father to black son Sam (although, or because, he's not Sam's real father). A kind, aging fellow. And—as we learn only after Greene has made us at home with Castle—a spy. Grateful to the Communist agent who helped Sarah and Sam escape from South Africa and himself a scarred enemy of apartheid, Castle has been leaking information, via coded Tolstoy and Trollope, to Moscow, piddling stuff mostly. But now, just as his superiors start to suspect him (they've "eliminated" Castle's young colleague by mistake), the "Uncle Remus" operation passes across Castle's desk—an Anglo-American-German plan to ensure the stability of South Africa's white regime. Should Castle risk this one last leak even as his former friends at "the firm" obliquely, inevitably close in on him? Greene, of course, builds suspense, cinematically, like nobody else in the business, but that is only a fringe benefit when the world's most gracefully gifted and practiced storyteller is operating at full power. Scene after scene—a stiflingly chic Chelsea wedding party, an attempt at nightlife camaraderie among fellow spies, a priest's refusal to hear non-Catholic Castle's confession—snakes by with acerbic energy; character after character darts up with surprise pockets of vulnerability. But this book is ultimately all Castle's, for Greene has returned, in part, to his earliest style, has pared down his moral patterns to the barest essential, has abandoned his penchants for exotica and skirmishes. What remains is a story as apparently plain as Greene's perfect prose—an open-hearted, tight-lipped pavane of conscience and sentiment that can be watched and enjoyed for all the wrong, and all the right, reasons.