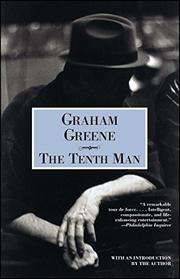 By his own admission (in a brief introduction here), Greene had "completely forgotten" the existence of an unpublished story called The Tenth Man—sold in 1944 to MGM, which dug it out of the archives in 1983. And, if that seems like an unpromising omen, so does the fact that Greene fills out the first half of this slight volume with "two more ideas for films"—both of them thin, shorthand-style scenarios. It's a pleasant surprise, then, to find that The Tenth Man itself is a more-than-respectable novella—far from a major addition to the Greene oeuvre, but a curious, intense, ironic tale reminiscent of Georges Simenon's better exercises in darkly psychological suspense. The setting is Nazi-occupied France during WW II; the Germans have filled a prison with innocent Frenchmen—to use as hostages in case of anti-German activities by the French townfolk. So, after two German soldiers in the town are murdered, the "orders are that one man in every ten shall be shot in this camp." And when a single, middle-aged Paris lawyer named Chavel draws one of the fatal lots, he offers all his wealth—cash, country house—to anyone who'll take his place before the firing squad: a young fellow nicknamed "Janvier" agrees, making sure that his new fortune will be passed on to his mother and sister. Jump, then, to postwar France—where the shamed lawyer, now calling himself Chariot, can find no work, is near starvation. . . and pathetically arrives at his old country-house, now inhabited (gypsy-style) by Janvier's old mother and young sister Therese. But, though Therese is obsessed with hatred for the cowardly lawyer who enticed her brother to his death, she never suspects that "Chariot" is this very man: she lets him stay on as handyman; he slowly falls hopelessly in love with her, unable to share his dark, guilty secret. And when a thoroughgoing villain—a con-man/actor who falsely claims to be the real Chavel—later arrives at the house, anti-hero Chariot becomes something of a true hero, redeeming his previous cowardice. Less than fully satisfying, with characters who remain only sketches—but full of sharp Greene touches (including a button-down priest) amid the slightly murky Simenon-esque landscape.