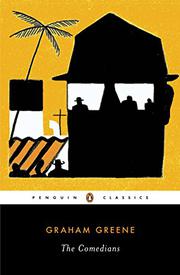 Greene usually subdivides his fiction into novels or entertainments. This is to an extent the former, but superlatively the latter. As an entertainment, it is an adventure story with some fauve scenery— Haiti, that "shabby land of terror" under the regime of Papa Doc, a dictator who may be a survival—or revival—of Baron Samedi. As a novel, even if it is not as seriously concerned with conscience and commitment as its predecessors, there are reminiscent asides; and there's an attractive affair. The comedians of the title are Smith, Jones and Brown, as improbably brought together by the "authoritative practical joker" as the old routine they suggest. They meet on the way down to Haiti where Brown, who tells the story, is summoned by his mother, a grande amoureuse, who lives and dies with abandon. Brown, who was born in Monaco, is not only a man without a country but a purpose or a belief. Jones is a confidence man with a special, unexpected innocence. And Smith is a freedom-riding vegetarian with a dream of nut cutlets and educational films for the natives. Together they are involved in this variation of the absurd: death, the suicide of an ex-minister; love, Brown's attachment to the young wife of an Ambassador; hope, the liberation of Haiti from Papa Doc; and faith, Brown's not quite lapsed Catholicism.... Greene says, comedians are an "honorable profession... If only we could be good ones the world might gain at least a sense of style." And Greene's Comedians is eminently, expertly stylish. It may not be his most important book but a good many attractive adjectives apply.