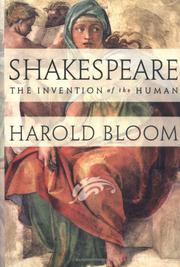 The Invention of the Human

A magisterial survey of the Bard's complete dramatic oeuvre by the always stimulating author of The Western Canon (1994). Bloom (Humanities/Yale) accurately describes himself as "Brontosaurus Bardolater, an archaic survival among Shakespearean critics." He unabashedly follows Samuel Johnson, William Hazlitt, and the great writer-critics of English Romanticism in concerning himself primarily with the dramatist as a peerless creator of characters and profound explorer of our deepest existential questions; he decries the "School of Resentment" (Bloom's blanket term for feminists, Marxists, deconstructionists, et al.) and high-concept modern directors, all of whom, he argues, interpret the plays in terms of historical particulars instead of universal truths. For Bloom, as the subtitle suggests, Shakespeare's greatest achievement was "the inauguration of personality as we have come to recognize it . . . [he] will go on explaining us, because in part he invented us." This emphasis makes the author an engaging explicator of the comedies, histories, and some aspects of the tragedies, which all feature personalities remarkable for their "inwardness"; his masterpieces are the discussions of the anguished, antic skeptic Hamlet and the jovial pragmatist Falstaff, whom he claims as "the fullest representations of human possibility in Shakespeare." Bloom is less effective with late works like The Winter's Tale, in which the Bard largely abandoned psychological realism in favor of a visionary mood that seems to make the critic uncomfortable. Philosophically, Bloom stresses the nihilism that animates Shakespearean villains and torments many protagonists; he tends to underrate the moments of hard-won reconciliation that close many of the plays. In short, the author offers a personal view with inevitable omissions and weaknesses (unnecessary repetition and gratuitous polemics against political correctness among them). Nonetheless, this is a splendid book: elegantly written, scholarly yet accessible, radiant with Bloom's love for Shakespeare in particular and literature in general. Less interesting as a salvo in the ongoing culture wars than as an old-fashioned exercise in narrative criticism for the general reader and, as such, very nearly perfect.