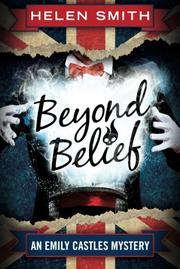 When a psychic foresees death at a seaside convention, even the most cynical learn that they’d better pay attention.

Bored with her office job in London, Emily Castles happily accepts an all-expenses-paid trip to the resort town of Torquay, the site of Belief and Beyond, a convention for paranormal research. Her friends at the Royal Society for the Exploration of Science and Culture are also willing to pay for her services as a future-crimes investigator, particularly since Emily’s neighbor, Perspicacious Peg, has had premonitions that someone will drown at the convention. The highlight of Belief and Beyond is notable magician Edmund Zenon’s offer of £50,000 to anyone who can prove the existence of the paranormal. Emily is as skeptical as Zenon himself that anyone will collect the money, especially after she meets some of the conventioneers: the leader of an obscure religious cult, a couple who’ve brought along the psychic who’s communicating with their dead son, and a fortuneteller who owns a costume store to help with dry spells in her vocation. The foreboding visions, after much arch humor at the expense of the daffy characters’ antics, finally start to come true—and then don’t stop.

Emily (Invitation to Die, 2013, etc.) returns in an equal-opportunity satire of those who believe in the paranormal and those who exploit the believers. It’s an enjoyable tale with a leisurely buildup, though readers in search of a fast-moving mystery will be fidgeting long before the first murder.