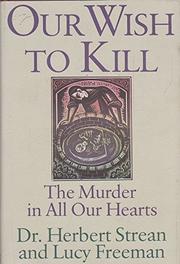 OUR WISH TO KILL

The Murder in All Our Hearts

A plea for compassion for the murderers in our midst, who in the authors' Freudian view, where good and evil do not exist, re pitiable victims, differing from the rest of us not in kind but only in degree. Psychotherapist Strean and writer Freeman (Behind the Couch, 1990; The Severed Soul, 1988) explain how the basic aggression all humans are born with can be transformed into murderous hostility when children are deprived of love and security and subjected to abuse in its many forms. Following a look at the origins of the murderous impulse, the authors discuss murder of children by parents and vice versa, murder of wives by husbands and vice versa, serial killers, and finally murder of self, or suicide. Case studies abound. While ostensibly seeking our sympathy for murders as society's victims, however, Strean and Freeman have chosen to include horrific details of crimes that are more likely to evoke revulsion than sympathy for their perpetrators. Debatable, even dubious claims are stated as absolute facts-''What precipitated Marilyn Monroe's suicide was loss of a lover, Attorney General Robert Kennedy, who decided to remain with his wife and eight children instead of marrying her''-sometimes with little apparent justification for inclusion other than their titillation value. A rather glib treatment of a serious problem that lingers too long on the details of murders and comes up short in its stated aim of showing how we can be more loving, constructive human beings and society can be made more thoughtful and caring.