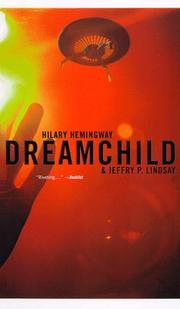 Borrowing a title from Dennis Potter, Hemingway (niece of Ernest) and her husband Lindsay continue a tale begun with Dreamland (1995), wherein Annie Katz seemingly lost her four-month foetus when it was abducted from her body by aliens but later returned so she could carry it to term. Of course, astronomer Annie and physicist husband Stan had to face murderous Black Berets, a supersecret intelligence cadre operating from a top-secret Air Force base. Now little Max is five, mute, and having strange dreams of floating in a pool of liquid blue. He’s also got an overlarge brain and a BB-sized implant in his nose. Slowly, he finds that he can read minds as well, able to take in whole histories from people. Sex has died between Annie and Stan, who is having an affair with bosomy British geophysicist Alexis Campbell. Meanwhile, the Black Berets are back in strike position and global warming is wreaking havoc with the planet. At last Annie’s sex drive returns and she again finds herself ready for Stan’s arms. But how can Max’s five fingers have metamorphosed into three cold rubbery ones with a strange double-jointed thumb? Is he one of them, or can he only communicate with them? What will Max eventually metamorphose into, and when he does, will the story be over—or just beginning? The Flood is coming, the authors—and far-seeing Max—have promised. Fun, but unlike tales by abduction specialist Budd Hopkins, less than convincing.