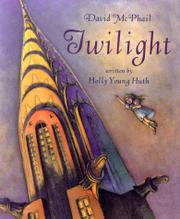 In a charming fantasy that burnishes the New York cityscape with an affectionate glow, a little girl and her mom walk along the avenue. The child, clearly loving the taste of the word in her mouth, says, “It’s twilight” over and over to the folks they pass: a storekeeper, a couple in love. As the keeper of twilight, the girl flies to the “place that lived after the sun and before the moon” beyond the Chrysler Building, where she shines up a few cherubic-faced stars, reads the sun a bedtime story, and scolds an owl for opening an eye too soon. She encourages the sweet-faced crescent moon to rise over the Statue of Liberty, and then returns to her mother’s side, taking her hand, for now it’s nighttime, and “She wasn’t in charge of that.” The watercolor-and-ink paintings indeed have the tender dimness of what the French call l’heure bleu. McPhail makes a seamless transition from the streets and sidewalks to mystical aerial views wherein the girl soars with a flock of pelicans over the Brooklyn Bridge and even hushes a pack of coyotes in the russet desert on her twilight run. The language is expressive but never mushy, and sure to delight. (Picture book. 5-8)