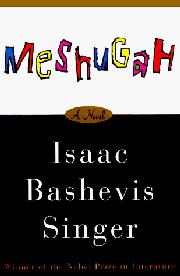 The late Nobelist's third posthumously published novel (after Scum and The Certificate) was serialized (1981-83) in Yiddish in the Forward newspaper and was titled Lost Souls. But "meshuga" (crazy) is the world where lies were bits of truth, where "no sooner did one free oneself of a neurosis, then another rushed in to take its place," and where God — the novelist? — maybe has a meaning in the works. Singer's following will feel at home: those uptown Broadway cafeterias of the 50's, a sub-shtetl of recent immigrants, nursing coffee and gossip, Manhattan in freezing cold or blazing heat, milling pigeons, the eerie vacancy of skyscrapers. And throughout there is the crazy choreography of uprooted random survivors of the Holocaust, drifting, as here, into odd combinations; and always wry cosmic questions nag: "What does God want? There has to be something He wants." Narrator Aaron Greidinger, writer and radio "advisor" to a Yiddish-speaking following, is stunned to see in large person Max, once patron of the arts in Warsaw, in roaring top form as "the well-known glutton, guzzler, womanizer." Max sweeps Aaron off to meet his 27-year-old lover, Miriam, another camp survivor. The trio achieves a psychic/sexual entity: Max, the elderly "husband, father, lover," considers lovers Aaron and Miriam his children. Aaron, bemused, somewhat horrified, sees "entanglements without exit": Stanley, Miriam's flabby husband, barges in, points a gun (there is a question about God); lovers old and new send signals; Miriam's wartime sex is more serious — and there's worse to come. At the last, after a trip to Israel, and a terrible discovery, Aaron weighs love and obligation in the shadow of a world's "slaughterhouse." Solid representative Singer with speculations light and dark, comic and searing. Manna for his following, who know that wherever Singer touched pen to paper there sprang up a village — of ghosts, of survivors, of all of us.