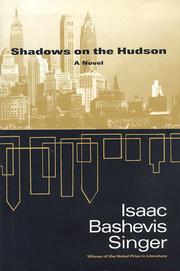 SHADOWS ON THE HUDSON

The late Nobelist (1904-91) left us yet another gift in this previously untranslated long novel, originally serialized in Yiddish in the Forward more than 40 years ago. The story, set in the late 1940s, begins with a masterly piece of exposition: a dinner party in New York City hosted by Boris Makaver, a refugee whose commercial success has enabled him to indulge his devotion to orthodox religious practices and generosity to friends whose assimilation to their new country has been less successful than his own. Boris's guests include his beautiful daughter Anna, unhappily married to attorney Stanislaw Luria; Professor David Shrage, a mathematician whose wife perished in the Holocaust; a saturnine doctor whose family hides a guilty collaborationist secret; and, most crucially, Hertz Grein, an idealistic scholar who has struck it rich in the stock market and is the object of Anna Luria's adulterous attentions. Singer explores the exhaustive combinings and recombinings of these lives with those of several other richly drawn characters, the most vivid of whom is Anna's first husband Yasha Kotik, a celebrated comic actor who will stop at nothing to achieve success and win back his former wife. Marriages and affairs fall apart; age and death take their toll; the wisdom of the scripture and kabbalah and the precepts of the great philosophers and avatars of modern science are passionately debated in extended conversations that seethe with drama. This is soap opera raised to the level of genius, in a consistently absorbing novel whose amazing breadth and verisimilitude suggest a contemporary Tolstoy. And Singer concludes it triumphantly, in a series of summaries of his several protagonists' fates, all of which are memorably encapsulated in the chastened Hertz Grein's simultaneous self-justification and apologia: "One cannot keep the Ten Commandments while one lives in a society that breaks them." A matchless portrait of human frailty seen from the perspective of a vast compassionate understanding. A major work, from one of the great modern novelists.