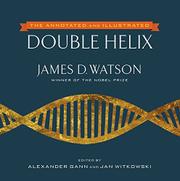 THE ANNOTATED AND ILLUSTRATED DOUBLE HELIX

The classic Double Helix (1968) is here again, this time annotated and illustrated and told in all the bold, brash, bumptious style that has become Watson’s (Avoid Boring People and Other Lessons from a Life in Science, 2007, etc.) trademark in the intervening years.

The book scandalized Watson’s peers, got scathing reviews from some, threats of libel from others and all but destroyed relations between Watson and his co-discoverer, Francis Crick. Of course, there was that classic first sentence: “I have never seen Francis Crick in a modest mood.” Reading it again does nothing to diminish the excitement of the pursuit: Watson and Crick batting ideas back and forth, reading, experimenting, consulting, making models, zealous to win out over the competition, primarily Linus Pauling at Caltech. What makes this version so rewarding is the fact that editors Gann and Witkowski have wonderfully put the pursuit in context. The footnotes and illustrations provide thumbnails of the cast of past or contemporary scientists who played a role: in London, Maurice Wilkins and Rosalind Franklin, whose X-ray crystallographic images of DNA were critical clues, or those scientists at the Cavendish lab in Cambridge, where Watson and Crick worked. But context also means scenery and lifestyle: the pub lunches, the girl-chasing, the films, dances, ski trips and holidays in storied mansions that Watson so adored. Interestingly, even at the height of battle, with the double helix almost in view, Watson needed time off to play tennis, see a film or attend parties. The book’s publication marks the 50th anniversary of the Nobel Prize awarded to Watson, Crick and Wilkins.

Readers old or new are in for a fine treat; there really has been nothing in the history of science writing comparable to Watson’s tell-all memoir.