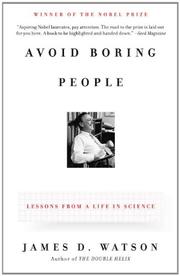 Lessons from a Life in Science

Age cannot whither nor custom stale the sharp tongue of “Honest Jim”—the title the Nobel Prize–winning Watson (DNA: The Secret of Life, 2003, etc.) originally wanted for The Double Helix, his first tell-all account of science and personal history.

Now in his late 70s, Watson chronicles his life from birth through middle age. We learn of a close-knit family and an early love of ornithology, but the even greater appeal of genetics by the time of graduate school. Watson’s career took off as he began working with hot-shot geneticists studying bacterial viruses (phages) like the future Nobelists Salvador Luria and Max Delbrück. Indeed, the names of Watson’s mentors, peers and former graduate students read like a Who’s Who in molecular biology. They also underscore some of the “remembered lessons” he adds to each chapter, e.g., “choose a young thesis advisor”; “choose an objective apparently ahead of its time.” The main text deals with the years Watson taught at Harvard and later when he became director of the Cold Spring Harbor Laboratory on Long Island, moving it from near bankruptcy to growth and continued pre-eminence. Watson has certainly made his mark as scientist, teacher, textbook writer, nurturer of talent and canny administrator. But Honest Jim also made known his contempt for mediocre faculty and administrators, and he lost a key battle in trying to get Harvard to fund tumor virus studies—the Next Big Thing in the ’60s and ’70s. Around that time, Jim, ever the nerd, finally met and won the lovely Liz, a Radcliffe undergraduate who married the 39-year-old bachelor in 1968. The chronicle ends abruptly in the mid-’70s, save for a shocker of an epilogue 30 years later. Watson again confronts Harvard with the need to beef up basic science only to face Larry Summers and later Derek Bok, who had distinctly other ideas—though Watson does not fault Summers for his conjecture on women in science.