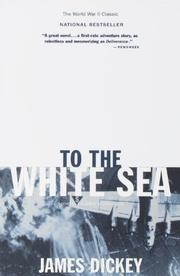 TO THE WHITE SEA

Dickey doesn't write many novels—three in 23 years—but he makes every one count. And when he's in peak form, as he is here, he makes every word count as well: In this unforgettable story of an American soldier escaping across WW II Japan—a story closer in spirit to Deliverance (1970) than to Anilam (1987)—the prose of this 70-year-old poet slices down to the bone of things like an immaculate knife. On a bombing mission over Tokyo, the B-29 carrying Dickey's hero/narrator—the gunner Muldrow—is shot down, forcing him to parachute into enemy territory. But Muldrow isn't like other men: Raised as a hunter in Alaska, he knows how to get things done. He alone survived the plane crash because he alone had the foresight to tape a parachute to the plane wall—and the same knack for survival gets him out of Tokyo by allowing him to take what he needs as Allied planes firebomb the city. He needs clothes: Amid the heat and smoke, he finds the right-sized man and blows him away. Muldrow decides to head for Japan's northern island of Hokkaido; there, in the snow and the cold, he will survive. He walks; he hops a train; he kills. He meets his match in a blind swordsman, and he almost dies when he encounters an American Zen monk who betrays him—just as this incident, alone in the novel, betrays Dickey's artifice through its too obvious contrast between the monk's grasping for reality and Muldrow's practiced hold on it. As Muldrow treks north, the mercilessness of that hold becomes ever more apparent and is mirrored in the stark beauty of the ever harsher landscape; by the lyrically brutal conclusion, Muldrow, like the animals he admires, has become one with the land: "I was in it, and part of it. I matched it all." A ruthless adventure of body and soul by a writer of mature- -even awesome—powers.