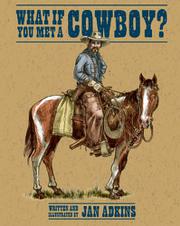 WHAT IF YOU MET A COWBOY?

From the What If You Met… series

Following other books in the What if You Met…(a Pirate, 2004; a Knight, 2006) series, this title somewhat less successfully tackles the subject of cowboys.

The image of the handsome cowboy idealized in movies, “on the lookout for pretty schoolteachers and Indians on the warpath,” is shattered by Jacob McHugh Peavey, the “real deal,” unwashed and unshaven. Only careful readers will determine that Jake’s heyday was around 1860-1885. He’s white, although Adkins notes that “[a]bout half of [cowboys] are African-American, Indian, or Hispanic.” Cowgirls are dismissed in a side note. Given this limited perspective, youngsters interested in diversity in the Wild West will want to look elsewhere. Those not familiar with the history of Native Americans may require a source to understand potentially confusing descriptions of Franciscan missionaries who introduced horses in the Southwest as “relatively gentle and patient” conquerors who received an assist from European diseases or the “hostile native” tribes or youth that may on occasion pose a threat to Jake. (Source notes—a list of titles consulted—are provided, but there are no specific citations.) However, children enamored of cowboy gear and cattle drives will find a plethora of information about and detailed illustrations of saddles, guns, brands, the chuck wagon and more, each topic covered in one or two pages.

As Wild Bill Hickok “says” in his blurb: “Factual as far as it goes.” (glossary, further reading, index) (Nonfiction. 8-10)