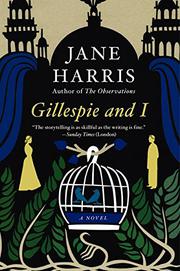 Elegant novel of love, loss and redemption among the Victorians and Caledonians.

Harriet Baxter is a hither-and-thither kind of person, capable of getting where she needs to go, even if the mores of the time suggest that a 35-year-old woman should not properly be wandering off alone for “a sojourn to the magnificent spectacle that was said to bestraddle both banks of the River Kelvin.” Yet, once they’ve fled the pea-soup fog of London and seen the bright lights of Glasgow, how are you going to keep the lasses from such wanderings? Introduce love into the mix, and you stand a chance—and so Harris, who staked out Victorian Scotland as her home turf in her debut novel The Observations (2006), does. Once on the auld sod, Harriet—who narrates these events from a distance of half a century—saves a woman from choking on her dentures. That act draws her into the orbit of the woman’s family, which just happens to include a brilliant artist named Ned, whom Harriet instantly groks as a soulmate, if not necessarily a physical one: “His name is Gillespie, sir, and he’s already married,” she tells her stepfather about her newly kindled friendship. (On that point, how the Victorians managed to reproduce is a subject of mystery.) All this happens in a short span of pages, at the end of which Harris gives us to understand that things are not going to end well. Harris writes sensitively and in rich detail, whether conjuring up a Glaswegian streetscape or the elements of one of Ned’s compositions. The imbroglio that she conjures up for the Gillespies is something of a potboiler, involving white slavery, unlawful carnal knowledge and Satanism. Or perhaps not: as Harriet complains, “It is incredible what the newspapers are able to get away with printing.” The narrative holds up well to the very end, though the reader will have to have the ability to wend his or her way through the leisurely sentences appropriate to the time and place.    A fine evocation of a lost era, and without a false note.