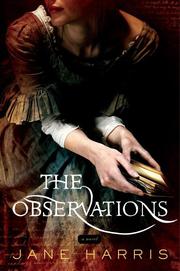 In her entertaining debut, a British writer hands the job of storytelling to a saucily streetwise servant in Victorian Scotland.

Daisy O’Toole (aka Bessy Buckley) leaps to irresistible life on page one of this historical mystery/romp—she’s a savvy, earthy, comical and compelling character in search of decent work, having already earned her stripes as a child prostitute and live-in concubine when she was probably no older than 14. Despite her salty tongue and seen-it-all attitude, she charms her way into employment at Castle Haivers, working as the “in and out girl” (i.e., maid) for Arabella Reid, who is secretly writing Observations on the Habits and Nature of the Domestic Class in My Time, for which she obliges Daisy to write a (semi-literate) journal. Harris neatly layers these texts, with their omissions, embellishments and varied versions of the facts. Daisy learns from Arabella’s book that a previous maid, Nora, a model servant, met a nasty end under the wheels of a speeding train. Daisy uses her own journal to exploit her mistress’s nerves and Arabella has a breakdown, her mental health now given over to the care of her husband and a doctor keen to apply punishing contemporary remedies. (While Sarah Waters’s Fingersmith took a different, more terrifying look at Victorian treatment of the insane, the authors have in common an invigorating modern approach to historical fiction.) Harris’s story, though light on plot, is rich in character, its strength deriving almost wholly from Daisy’s irrepressible and ripe narrative voice. A helter-skelter conclusion combines farce (Arabella escapes confinement and beats with a shovel the pompous cleric responsible for Nora’s downfall), tragedy (another death on the railway line) and moral improvement (Daisy’s virtues recognized), takes a few sideswipes at the publishing business and still leaves the door open for what Daisy might do next.