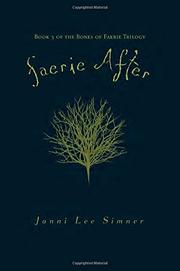 From the Bones of Faerie Trilogy series, volume 3

With the faerie and mortal lands crumbling away, a teenage girl must work with both worlds if anyone is to survive.

The Bones of Faerie series concludes with this high-stakes adventure for Liza. Relative peace has descended upon Liza’s town, where she practices her summoner magic and waits for her half-faerie baby sister to be born. But the forest is showing new dangers, though subtle ones: a strange-smelling gray leaf that crumbles away; a dying squirrel whose back half has turned to dust; “a pair of empty boots, as far apart as a man might stand, filled with the same dust.” Liza’s quest to find out what’s wrong reveals fresh disasters. In Faerie, the dust is everywhere but hardly as tragic as the fire fever— radiation poisoning—that’s devastated the population since the War. In the mortal world, the dust is rapidly spreading in the bloodthirsty, carnivorous forest that was Faerie’s weapon against the humans. Liza’s solution to the problem of the rapidly unwinding universe is not always easy to follow, but the personal is sufficiently compelling to outweigh any problems with the metaphysical.

In a satisfying trilogy conclusion, Liza confronts the conflicts between saving the world and saving her friends in an environment where nobody is willing to let go of the last generation’s hatreds.