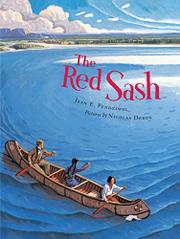 Offering a glimpse into the early years of the Canadian fur trade, this tale of a young Métis’s coming-of-age is driven as much by its historical detail as by plot. While waiting for his father, a voyageur, or guide, to return to Fort William for the great summer gathering of traders called the Rendezvous, the narrator helps rescue a “gentleman,” whose canoe is damaged in a squall, and so earns the coveted red sash that marks him too as a voyageur. Meanwhile, Debon’s precisely drawn aerial view of the fort and broadly brushed scenes of Europeans and native residents in period costume fill in the setting. Supplemented by a long note, a glossary and a map, the episode comes off as purposeful, but there’s enough drama to rescue it from aridity. (Picture book. 7-9)