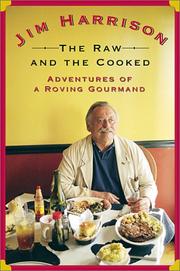 THE RAW AND THE COOKED

Adventures of a Roaming Gourmand

Holding the view that “many of our failures in politics, art and domestic life come from our failure to eat vividly,” Harrison is in search of the transcendent, whether in nature (trekking is the only pastime he seems to feel as passionate about as food) or on the plate. He finds it in intense flavors, the American landscape, his past, and his family: the subjects of most of his essays. In general, he concerns himself with documenting some of the colossal meals he’s hunted, created, and consumed, but he concludes with an extended essay about French eats and a collection of correspondence with Gallic food expert Gerard Oberle. Those two pieces place Harrison in the continuum of great food-lovers, reminding us that he is not just a lonely champion of appetite in an American wilderness of moderation. The author’s relationship with food is nothing if not extreme, having run the gamut from youthful anorexia to his current battles with gout, that plague of unbridled gourmands. Somewhat surprisingly, this master of clever iconoclasm turns out to be a namedropper, although it is almost always in an effort to give credit where credit is due. He lavishes praise on favored cookbook authors, chefs, and restaurants, and perhaps he simply wants to give buddy Jack Nicholson proper acknowledgment for the witticism “only in the Midwest is overeating still considered an act of heroism.” The author claims to be victim of “one of a writer's neuroses—not to want to repeat himself”; this collection, however, insistently reveals his pet phrases and anecdotes.

Delightful in small doses, but too intense to be consumed in a single sitting.