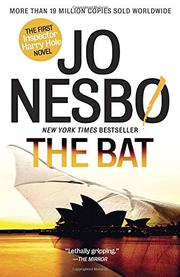 It’s an unusual debut since the very first page finds Harry clearing passport control in Sydney, half a world away from his native Oslo, from which he’s improbably been sent to observe the Australian investigation into the probable rape and undoubted strangling of Inger Holter, who once hosted a Norwegian children’s TV show but had been working in a Sydney bar when she died. Neil McCormack, head of the Surry Hills Crime Squad, explains to Harry that although he’s been paired with Aboriginal detective Andrew Kensington as a professional courtesy, he’s not to take a leading role, not to make any inquiries on his own, and not to interfere with McCormack’s chain of command. Right. Fans of Harry’s later adventures (The Redeemer, 2013, etc.) will wait with bated breath to see how long it takes him to break every rule in the book. Nor does Harry disappoint. He converts a key witness, Inger’s fellow barmaid Birgitta Enquist, into his bedmate. He starts drinking again. He adds a local prostitute to his list of conquests. He gets into a series of increasingly violent brawls. As it becomes more obvious that the cops are dealing with a serial rapist who has no reservations about killing, Harry brushes elbows (and more) with Inger’s new boyfriend, Evans White, a drug dealer in New South Wales; with Teddy Mongabi, the baddest pimp in Sydney; and with transvestite clown Otto Rechtnagel, whose status as the most likely suspect is canceled for the best possible reason.

Harry is already every bit as volcanic as in his later cases. The big difference is Australia, which Nesbø, seeing it through the eyes of both a tourist and a cultural pathologist, makes you wonder how much different it is from Norway after all.