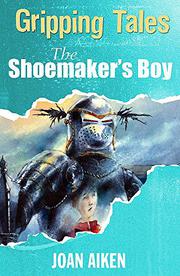 From a prolific British author who has ranged effortlessly from melodrama (The Wolves of Willoughby Chase [1962]) to loopy farce (Arabel's Raven [1972]), a polished tale suffused with allegory. Jem the shoemaker's son is left in charge of the shop and his desperately ill mother while his father journeys to a faraway shrine to pray for his wife's recovery. Late one evening a gentle white knight asks Jem to safeguard a small packet, saying that Jem may keep it if he doesn't return by daybreak. At risk of his life, Jem saves the packet from an ominous black knight with oddly shaped feet, who demands the three silver keys he says it contains. When the black knight vanishes at cockcrow, Jem opens the packet and discovers only a small square of white bread. At that moment, his mother rouses from her deathlike illness requesting "a little piece of fresh white bread." Jem's father returns with a tale of being rescued from a black-armored brigand by a knight in white, bearing a device of three keys on his shield. Christian symbols abound here, but whether the happy ending is attributed to miracle or magic matters less than Jem's fidelity and the rewards it merits. A lively, easily read tale whose appeal is in no way hampered by its rich resonances. Ambrus's dramatic, masterfully limned color illustrations appear on almost every spread. (Fiction. 8-12)