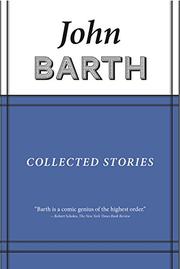 A monumental assemblage of this antic author’s short fiction, most of it steeped in the literary history and postmodernist contortions of “that peculiarly American species, the writer in the university.”

Each of the four collections gathered here has stories closely related by characters, themes, and stylistic high jinks, accommodating the preference Barth (Every Third Thought, 2011, etc.) notes in his introduction for the long form of the novel. They also reflect the writer’s constant parsing and playing with narrative conventions in metafictional outings that began with the Borges-influenced, multilayered confections of his first collection, Lost in the Funhouse (1968). “Menelaiad,” for tortuous instance, retells some of the Troy legend with mind-boggling embedding of multiple narrators like matryoshka dolls. On With the Story (1996) dials down the meta moments while including a Barth avatar who alludes to Funhouse. The story titled “ ‘Waves,’ by Amien Richard,” is fairly straightforward as two travel writers seek a good snorkeling site while painfully avoiding a shared tragedy. The Book of Ten Nights and a Night (2004) nods to all Barth’s favorite tale-tellers—Homer, Scheherazade, and Boccaccio—while a writer named Graybard and his Muse discuss “narrative” in sections linking the book’s actual narratives—including four pages that look like musical notations for a song containing the one word “help.” That the 11 nights are those following the terrorist attacks on 9/11 shows Barth venturing out of the ivory ziggurat and contemplating a “nation in shock.” More conventional are the stories of a Maryland gated community in 2008’s The Development. They have a comic take on community and an intimate sense of aging—Barth was almost 80 at that time. Still, he can’t resist his bookish japes, as with a writing student who presents one project in text written all over her young flesh.

As part of Barth’s challenging postmodernist corpus, the short stories offer smaller doses of the odd pleasures and strains of a restless intelligence and its relentless gaming of the literary system.