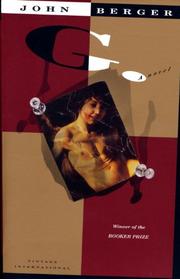 G. as anonymously archetypal as the use of the initial suggests, is the novel or rather anti-novel of the prominent British art critic and Marxist humanist. Berger is a man of bold and profligate talents and the work which is equally diverse (philosophical, social, moral) is capable of many readings. Superficially — a dangerous trap indeed — it is an almost contemporary retelling of the Don Juan myth. The book doses on the eve of World War I. G. is the illegitimate son of a gross merchant of Livorno and a fragile and uncertain Englishwoman whom he cannot marry. She takes the child back to England where before long he is abandoned to the care of others and after early episodes of sexual initiation (a governess, a tutor, his surrogate mother) becomes (in retaliation or because he has no other roots?) a womanizer. In his pursuit of the wife of a Parisian car manufacturer, the didactic eroticism leads to far broader-ranging speculation on the inseparability of romantic love and sexuality — on the act of submission which is again the bestowal of freedom and on sex as an equivalent of death — that familiar little death which is so "absurdly short-lived." Death encroaches more and more as the novel reaches its final inset in Trieste where G. becomes the circumstantial whim of the events taking place all around him; ahistorical, apolitical, he is used and betrayed by just those historical and political forces and only in dying perhaps achieves the answer to the lack of identity imposed on him since the beginning. Paradox abounds throughout the novel which Berger annotates with epigrammatic asides ("The writer's desire to finish is fatal to the truth") or evasive ones ("Yet we know there is a mystery. . . . I am writing this book in the same dark"). As for the rest, his style is aggressively visual and animated by its inexorable present tense. Ultimately (and ignoring the common reader whom it will defeat) it is an arresting, inordinately vital, impersonal, and remarkable work.